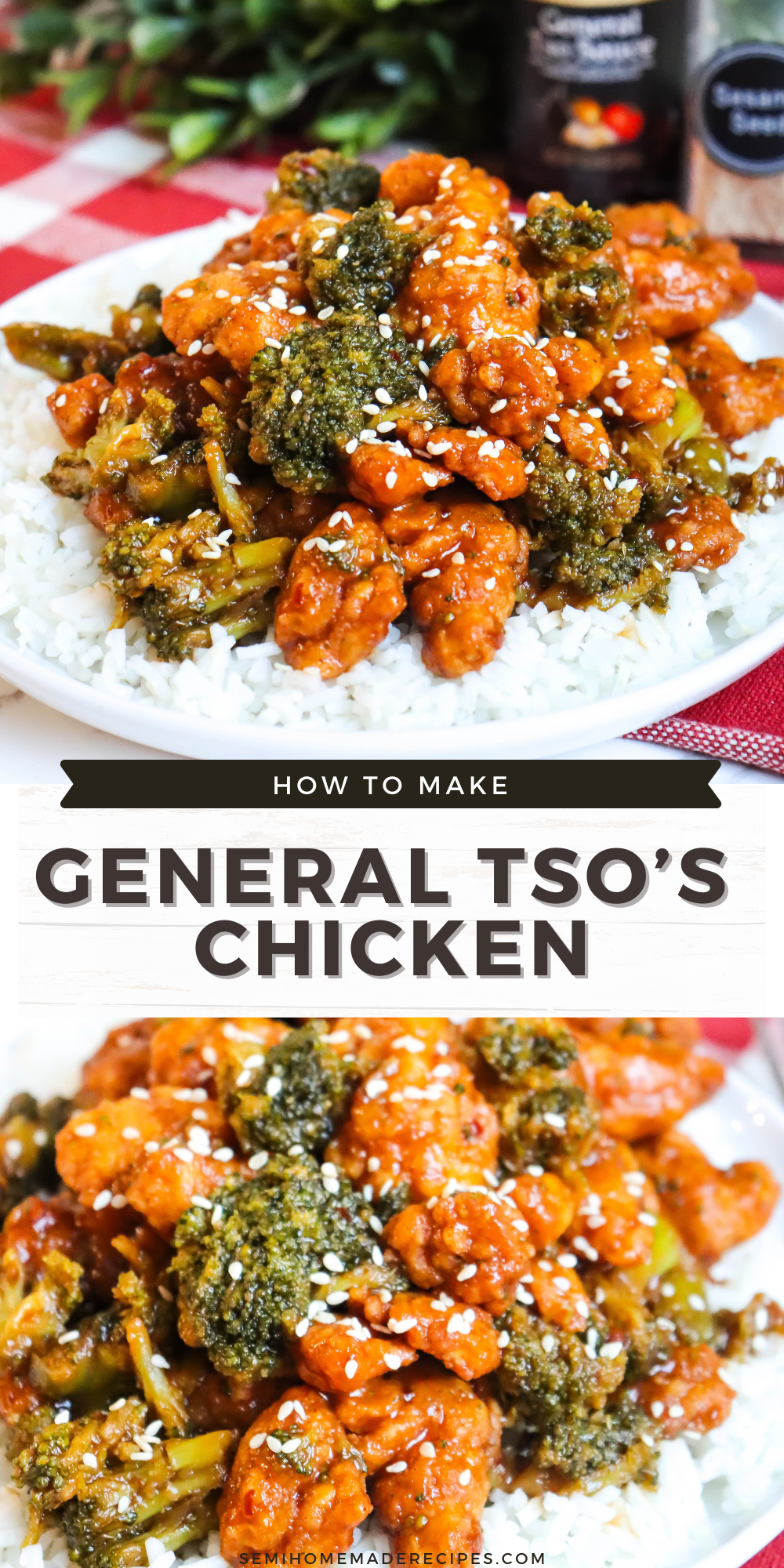 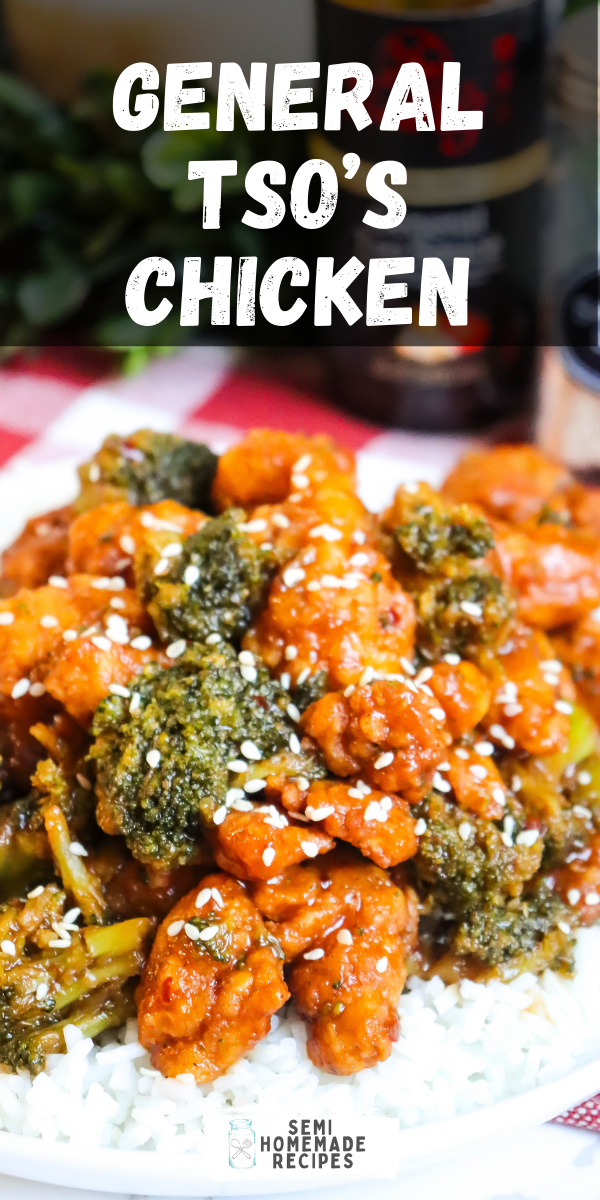 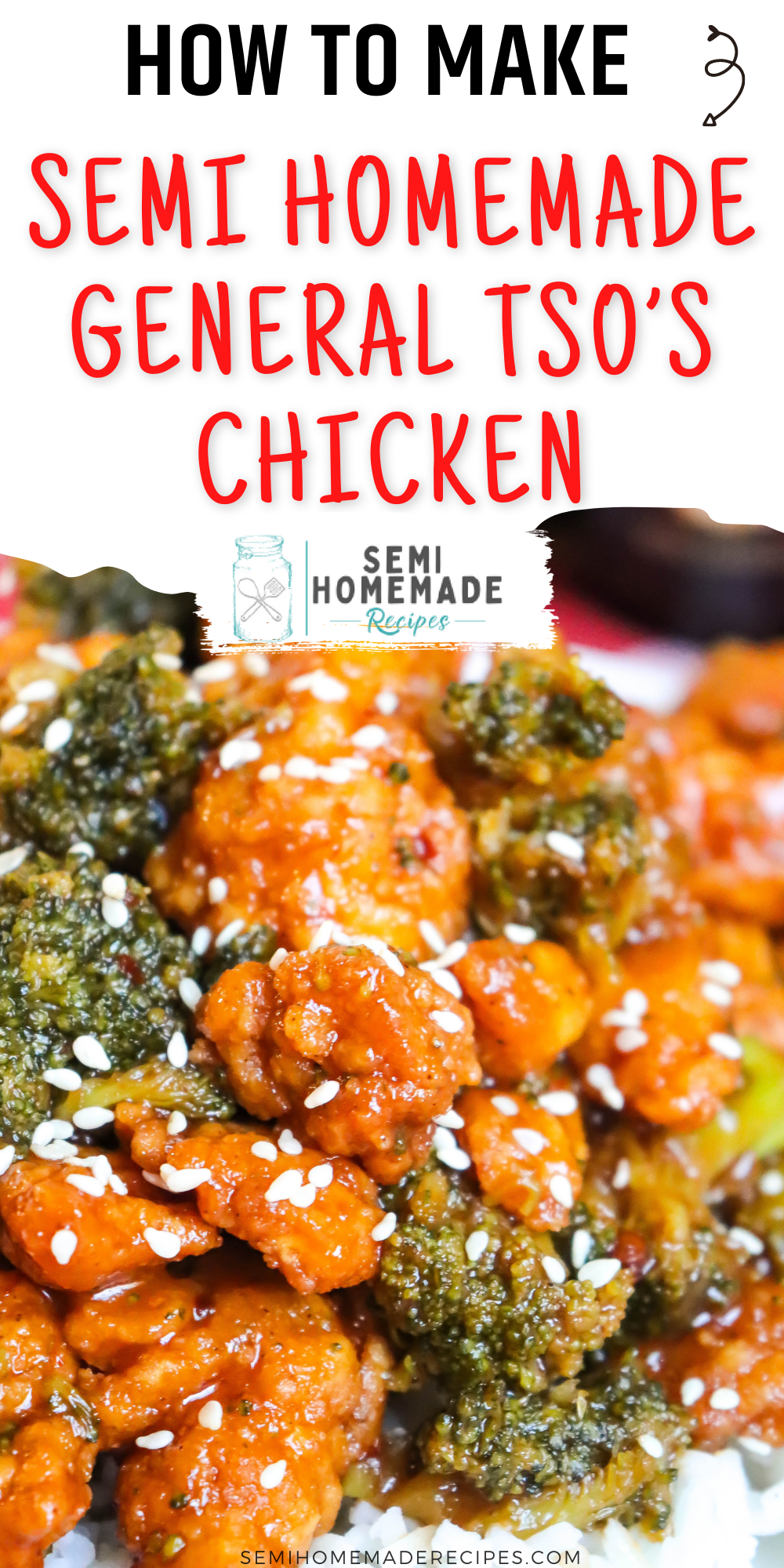 This General Tso’s Chicken is one of our favorite Chinese restaurant take out menu items with a Semi Homemade Twist. Popcorn chicken, General Tso’s sauce, and frozen broccoli come together for a quick and easy dinner idea!

RECIPE IS BELOW IN PRINTABLE RECIPE CARD BUT BLOG POST IS FULL OF “HOW TO MAKE IT”, TIPS, INFORMATION AND FAQ

Why a semi homemade version of this classic Chinese American restaurant dish?

What Is General Tso’s Chicken?

General Tso’s Chicken is a Chinese American dish that is served in Chinese restaurants around North America. It was invited in the 1960s or 1970s, depending on which information you are reading, by a Chinese Chef who was working in New York and decided to make a dish with a bit more sweetness for the American palate and named it to honor a general from his home of Hunan province of China.

Who invented it and which restaurant sold it first is also also up for debate.

It is a Chicken dish that is smothered in General Tso’s sauce and most of the time it is cooked with steamed broccoli and served with rice. I make recipes for this blog based on what mom and my best friends would make haha. They know how to cook and can follow a recipe but they don’t really make a lot of things from scratch, like sauces or homemade nuggets.

This type of recipe is quick and easy. Perfect for someone who doesn’t want to make every dish component from scratch but still wants to cook!

The flavors of Chinese takeout made super easy at home!

Why You Should Make General Tso’s Chicken…

(AMOUNTS IN RECIPE CARD BELOW)

How to make General Tso’s Chicken:

Can I use any kind of chicken for this recipe?

I use popcorn chicken because it is the same size and as close to the same outside texture of the Chinese restaurant take out General Tso’s Chicken. You could also use chicken nuggets or fried chicken tenders and cut them up into bite size pieces.

Why do you add water?

I add the water to make the crispy chicken softer just like the restaurant version!

What kind of General Tso’s Sauce do you use?

We like House of Tsang General Tso Sauce but you can use any kind that you like.

Do you serve it with rice?

When I make this at home, I serve it with Instant white rice or Jasmine rice.

Could I use leftover popcorn chicken?

Yep! This would be a great recipe for leftover popcorn chicken or leftover chicken nuggets.

I want the sauce to be EXTRA saucy, what should I do?

You can always toss in an extra bottle of sauce!

Do I have to use sesame seeds?

You don’t! I really just love them for the look haha. Normally sesame seeds are used on Sesame Chicken

Could I cook the nuggets by frying them in the air fryer?

You sure could! 350F for 10 minutes should work but check your frozen nugget’s bag for directions.

I need more heat in the sauce!

A lot of people love heat in their sauce, so you could always add in a few dashes of red pepper flakes, peppers or chilis.

Can this General Tso’s Chicken be stored and reheated?

Yes! Store this General Tso’s Chicken in an airtight container and refrigerate for 3-4 days. When you go to reheat it, you may find that the sauce is not a saucy as you might like. You can always add a bit of water, extra sauce or chicken broth to the leftovers before reheating them.

Lay popcorn chicken on tray and bake in preheated oven for 15 minutes or the time according to package.

Steam frozen broccoli according to package directions. Set aside.

Stir well until everything is combined.

Heat over medium heat until hot.

Serve over rice and sprinkle with sesame seeds.

If you make this recipe, snap a picture and share it on Instagram or  Facebook  with the hashtag #semihomemaderecipes — We love to see what you’re making from the blog!

Love the recipes that you’re finding here but worried about misplacing them? Sign up for my newsletter above for new recipes every week OR make sure to pin this recipe to your Pinterest account so it’s always easy to find! 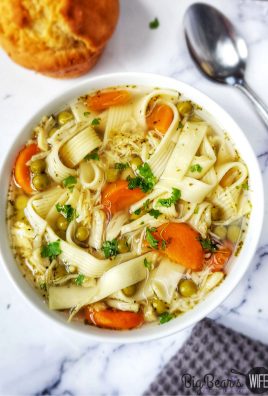 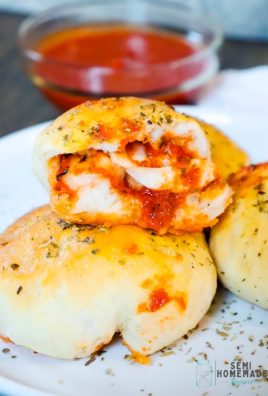 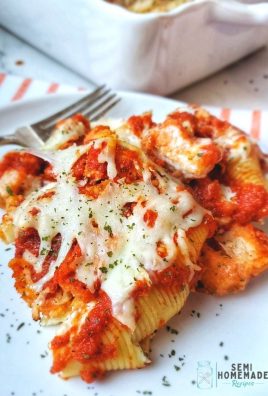